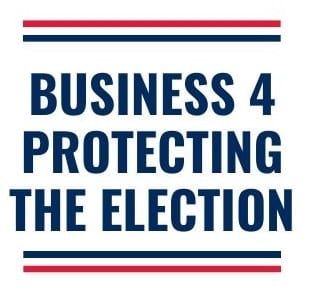 “Protect Democracy USA, the business campaign launched this past August calling on Congress to pass legislation critically needed to protect the 2020 elections has been re-branded “Business 4 Protecting The Election”.

“The business voice for securing our elections and protecting democracy has been very well received,” said campaign coordinator Frank Knapp.  “Since we launched our campaign, we have begun working closely with the national project “Protect Democracy” that filed a lawsuit in October, Inglis v. South Carolina.”  The lawsuit alleges “that the Executive Committee of the South Carolina Republican Party illegally cancelled its presidential primary in violation of its own rules and state law. The plaintiffs include former South Carolina Member of Congress Bob Inglis of Greenville County.”

“We were concerned that the similarity of the names of our organizations might cause some confusion,” said Knapp, who also is the president/CEO of the South Carolina Small Business Chamber of Commerce.  “The website and social media handles (Facebook, Twitter, Instagram) all reflect the new name for our national campaign.”

The newly named “Business 4 Protecting The Election” has created possibly the most comprehensive website of information on Russian and other foreign interference in the 2016 election.  The campaign provides the business voice of concern on the issue.

“While numerous voices have been raised on this issue, the small-business community had previously not been organized to demand that this crisis be addressed,” said Knapp.  “A secure election process unfettered by foreign interference is a prerequisite for a healthy democracy crucial to a sustainable free market in which entrepreneurs create businesses and jobs.”