This morning the Close the Gap South Carolina coalition, made up of 14 diverse organizations, held a press conference to unveil a new billboard and website calling for the State of South Carolina to accept federal money to provide private health insurance to 194,000 low income citizens locked out of the benefits under the Affordable Care Act.  The digital billboard is located next to the State Capitol at the intersection of Gervais and Assembly Streets in Columbia.

Below are the comments made by Teresa Arnold, State Director of AARP-SC, and Frank Knapp, president and CEO of the South Carolina Small Business Chamber of Commerce.

South Carolina has an important opportunity to close the coverage gap that leaves 194,000 low-income South Carolinians without health coverage. These South Carolinians, our neighbors, friends and family members, are a diverse group. Although many work, especially in strenuous jobs that wear down bodies, others cope with disability or mental illness. Many serve as caregivers, relieving public programs of significant financial burdens.

Lacking health insurance is bad for your health and leads to higher mortality. Lacking coverage leads to inefficient health care choices such as using emergency departments. Lacking health insurance is financially a very risky prospect, leaving people with low income and low wealth at risk of catastrophe from any significant health event. Health coverage provides a buffer against the kind of debt that leads lower-income families to bankruptcy in the face of a major health incident.

Low-income, near-elderly South Carolinians are particularly vulnerable. Many have deteriorating health, accompanied by a growing proportion of their spending going to health coverage, while family wealth and income has declined. Those plagued by chronic or multiple illnesses especially suffer. In some cases, lack of health insurance has pushed them from middle class into low-income.

AARP commissioned a study on how lack of health care affects people 50 to 64.

Sixty-three thousand low-income, near-elderly (aged 50 to 64) South Carolinians fall into a health coverage gap and lack health insurance.   The majority are white (56%) and the remainder are primarily African-American (40%).  Six percent are veterans of active military duty, including 11% of males. Although living at less than $16,000 annually for a family of one or $22,000 for a family of two and aged 50 to 64, they are not eligible for current public coverages such as Medicaid or Medicare. Most have too little income to be eligible for federal subsidies to purchase private insurance. As South Carolina considers closing the coverage gap for all of South Carolinians at or below 138% of the Federal Poverty Level (FPL), a particularly vulnerable segment of that population is the persons aged 50 to 64, the near elderly, looking towards Medicare eligibility in the future.

Coverage up to 138% of the FPL would come with a 100% federal match for health services, declining in SFY2020 to a 90% federal match and generating $2 billion annually in Federal matching funds by SFY2020. Although not without direct state costs, filling the coverage gap would fuel further economic growth through jobs and purchases of goods and services. At the same time, we would be purchasing better health for a particularly vulnerable portion of our population that has given so much to our state.

Comments by Frank Knapp, president and CEO of the South Carolina Small Business Chamber of Commerce

The approximately $1.7 billion a year in federal money that we are turning down would have a great impact on our economy. A USC study estimates that by accepting this money we could create 44,000 new jobs not just in healthcare but on Main Street from increased consumer demand.

By accepting this money we know that we would be creating a healthier workforce and that means more productive employees for our small businesses.

So how do we get to the point where South Carolina will stop refusing to accept $4.7 million a day from the federal government to help us close our health insurance coverage gap?

We get there by following the lead of other red states like Wyoming, Indiana, Tennessee and Utah that are right now negotiating with the Obama Administration.  They want to follow nine other Republican-led states in creating a private option that would use the federal money to buy private health insurance policies for their citizens in the coverage gap.

Such a plan would promote personal responsibility for health insurance while promoting individually owned health plans.

The Close The Gap South Carolina coalition believes that a private option is the way forward for South Carolina to close our coverage gap.  In doing so we will not only be doing the right thing for 194,000 of our low income citizens, but we will help our small businesses, our local economies and every person already with a health insurance policy. 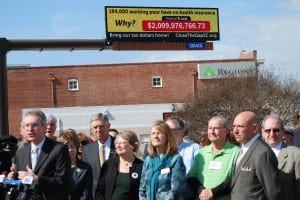