Ten years ago, I had the privilege of appearing with the U.S. Senator from Michigan, Carl Levin, in his Washington Senate office to speak to the press about Levin’s “Stop Tax Haven Abuse Act”. 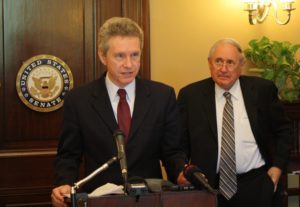 He was the leader in the effort to stop corporations from hiding revenue in offshore tax havens to avoid paying their fair share of taxes.

From The New York Times:

Carl Levin, a liberal Michigan Democrat who served 36 years in the Senate and scared the wits out of America’s biggest C.E.O.s by demanding explanations for shadowy schemes that hid billions in profits overseas and avoided vast corporate taxes at home, died on Thursday in Detroit. He was 87.

To my surprise on July 12, 2011, it was just Senator Levin and me talking to the press about the need for his bill.

Below are the comments I made that day that explained how multinational corporations using offshore tax havens harms small businesses.

Senator Levin has been missed in the US Senate since his retirement in 2015.

His legacy as a champion for the average American and small business owner will live on.

On July 12, 2011, Frank Knapp of the SC Small Business Chamber of Commerce joined Senator Carl Levin in a Washington, DC, press conference to announce the introduction of the Stop Tax Haven Abuse Act. Below are Mr. Knapp’s comments that he made today to the national media.

While our members are in South Carolina, small businesses across this country, from California to Washington, DC, understand that while they are paying their taxes, many US-based, multinational corporations are not. That’s not fair, and it makes us angry.

When multinational corporations don’t pay their taxes, when they use offshore tax havens to cheat, small business have to pay more in taxes.

Elected leaders like to say how small business is the engine of our economy, and they look to us to create most of the new jobs.

We can compete with our goods and services with any multinational corporation but not if we don’t require them to pay their taxes.

These multinationals and their highly paid advocates warn us that creating the transparency needed to spot illegal tax evasion and avoidance, better defining US profits and increasing penalties for offshore tax cheating would somehow hurt our country’s economy.

We’re not talking about any new taxes the money these multinationals are investing in American jobs. We only want the taxes they owe on money squirreled away in post office boxes in the Cayman Islands or Bermuda, profits that aren’t being invested in our economy.