Comments by Rick Baumann in Charleston on 12-11-18 in opposition to seismic airgun blasting.  Mr. Baumann is the founder of Murrells Inlet Seafood and a Board member of the South Carolina Small Business Chamber of Commerce. 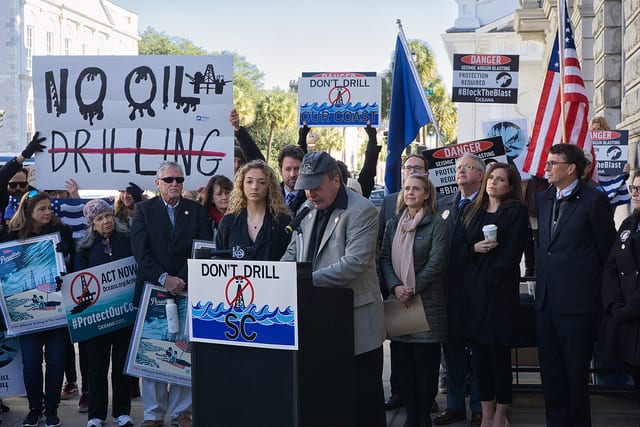 Good morning! My name is Rick Baumann. I’m just a humble fish cutter from Murrells Inlet, where I founded Murrells Inlet Seafood in 1967. I am also an elected board member of the South Carolina Small Business Chamber of Commerce.

I’m here to speak for the thousands of businesses which will be negatively affected by seismic blasting and offshore oil exploration – and I’m here to speak for my daughter’s generation – and my grandchildren and great grands – who will be severely affected by this “forever decision” that the current administration is trying to ram down our throats – in spite of our well expressed unanimous opposition to these plans.

It first became obvious to me that opposition was the correct choice on this issue after doing just a wee bit of study – and learning that the oil industry was not telling us the truth about anything involved with their proposal. Grandiose promises of jobs and revenue sharing were found to be grossly exaggerated and quite insignificant in comparison to our existing economy.

The industry said that seismic blasting had been used all over the world and that it was safe, It didn’t take much investigation to find out that these claims were also false. Recent science ties seismic blasting to drastic reductions in commercial fishing harvests as the fish move away or are injured or killed by seismic.

In fact, the government’s own Environmental Impact Statement on proposed seismic blasting in the Atlantic predicts “disorientation, deaf- ening and death” to hundreds of thousands of marine mammals, millions of fish and other ocean species if seismic is allowed to move forward. Does that sound safe to you?

The fishing industry has been subjected to dozens of different regulations, size limits and closed seasons in order to stabilize populations of fish at sustainable levels.

Shrimp trawlers have been required to attach turtle excluder devices to their nets to allow endangered and threatened species of sea turtles to escape safely.

Commercial fishing interests have been complying with government mandates to stop operations in huge swaths of the ocean where the critically endangered  Right Whales are present – for many weeks at a time.

All of these regulations and mandates are quite expensive to the industry – but are complied with in order to protect the species involved and the fish stocks we rely upon for our livliehoods. We operate in a compatible manner with the Atlantic Ocean – and our efforts feed the world!

The issuance of seismic blasting permits to the oil industry display a double standard on the government’s policies. Why are only fishing interests charged with proper management of ocean species while the oil industry is allowed to kill and maim them indiscriminately?  Does the Endangered Species Act apply to everyone but the oil industry?

In closing, I want to emphasize some pertinent points: Secretary Zinke of the Department of Interior said “these proposals are not a one size fits all situation. If we find areas that are compatible with these proposals we would like to move forward there”. Well, Mr. Zinke, just where are these “areas that are compatible” with your proposals? There aren’t any! Every town, city or county that weighed in on these issues has opposed your proposals for seismic blasting and offshore drilling – hundreds of them – and thousands of businesses  -from Maine to Miami. Not one municipal -ity on the east coast has spoken out in favor of your proposals – not one!

So Mr. Zinke, you broke your word. There are NO compatible areas for your plans but you really DO want to make a “one size fits all” out of this situation – even though the shoe DOES NOT FIT on a single foot  any- where on the east coast.

I went to Washington twice, representing the Small Business Chamber and the Business Alliance to Protect the Atlantic Coast, to personally convey that unanimous  opposition of these many thousands of small businesses and municipalities that would be negatively affected if all this moved forward. I sat in the boardroom with the Director of the Bureau of Ocean Energy Management and asked him point blank if even one community on the east coast had come out in favor of these proposals – and the room went silent.

Does South Carolina not matter to you? Are you going to disrespect our great Governor Henry McMaster – the first elected official to support you for the presidency? Did you not hear his respectful request to be excluded from these plans? Did you not hear all the other governors?

All you seem to care about are big polluting corporations and the passive investors who buy into them. Well sir, the working class folks in seafood, hospitality and tourism are not AT ALL impressed with that!

So folks, this action announced today should make Washington DC real damned aware of the fact that we WILL NOT STAND for this neglectful and condescending attitude!

SO – shout it with me if you will “NO SEISMIC BLASTING! NO OIL! NO WAY! NOT HERE! NOT EVER!”