This past Friday’s announcement by the Obama Administration’s Bureau of Ocean Energy Management that it was denying all seismic testing permits for oil exploration off the Atlantic Coast brought cheers from the business community, local governments, environmental organizations and citizen groups.

The permit denials, along with the March victory of offshore drilling in the Atlantic being pulled from the government’s five-year ocean energy management plan, were the result of an intensive battle to protect the Atlantic Coast tourism, commercial fishing and recreation economies from offshore drilling and exploration. Destroying our marine life through seismic airgun blasting and oil spills is simply not compatible with our vibrant seaboard according to the Business Alliance for Protecting the Atlantic Coast.

However, the Administration’s announcement also brought the boiler-plate objection from Big Oil and its supporters, the exploration companies that stand to make hundreds of millions from conducting seismic testing.

The president of the National Ocean Industries Association told the Associated Press that “seismic and other geophysical surveys have been safely conducted offshore . . . for more than 50 years.” “(T)here is still no scientific support for statements that sound from seismic surveys harms marine life populations,” according to the International Association of Geophysical Contractors.

Biological impacts of seismic airgun blasting have been well documented.

The effect on whales includes hearing impairment and chronic stress resulting in avoidance and displacement behavior. Data from U.S. government scientists indicate that as many as 138,000 marine mammals would be harmed from seisimic testing in the Atlantic.

Fish are harmed also and have been found to have damaged hearing structures and altered behavior responses resulting in 40%-80% reductions in commercial fishing catch rates. Sea turtles show avoidance and alarm responses to seismic testing. Even invertebrates like squid, crabs and scallops have been found to show stress response and even development delays and body malformations.

However, what the seismic testing advocates know is that all these negative impacts are out of sight and thus out of mind for the American public. Therefore it’s easy to simply say there is no scientific proof of damage to marine life.

This real-life experiment is currently underway in New Zealand.

Since November 13, 2016, the largest seismic testing ship in the world has been exploring for oil off the East Coast of that country.

Whales that typically live in very deep water soon were being spotted close to shore and beach strandings began by the end of December setting  off alarm bells. 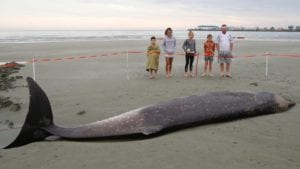 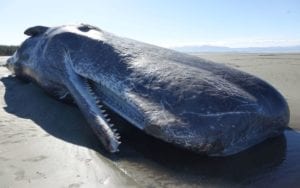 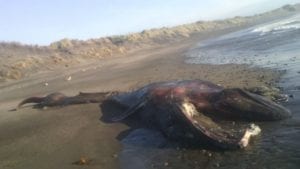 Fortunately for New Zealand, the dead whales were in remote areas and won’t impact the country’s economy. But just picture these great animals on the beaches of the Atlantic Coast.

And it’s not just whales. Dolphins, sea turtles, deep sea game fish, and commercial fish are all harmed by the sonic blasting that goes off every 10-12 seconds as the vessels troll back and forth mapping an area for up to a year.

That’s the economic “science” that tells the truth about what seismic testing would bring to the Atlantic Coast.

Death in the ocean.  Death in revenue.  Death in jobs.  Death to local economies.

Frank Knapp is the President/CEO of the South Carolina Small Business Chamber of Commerce and co-founder of the Business Alliance for Protecting the Atlantic Coast.