Enrollments in health insurance plans offered through the federal Affordable Care Act exchanges in South Carolina this year returned to levels not seen since 2016, according to information from the federal government.

The surge in sign-ups could be attributed to the fact that an unusually high number of workers lost their jobs — along with their employer-sponsored insurance coverage — during the coronavirus pandemic that rocked the economy starting in March. 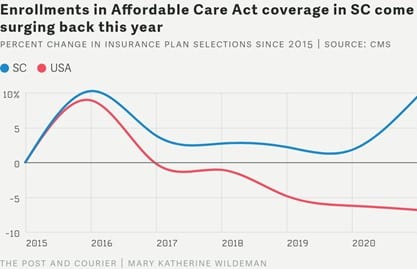 For plans that take effect in 2021, about 16,000 more South Carolinians signed up compared to a year ago, an increase of about 8 percent.

The final tally is subject to change, as figures for the entire enrollment period, which ran from Nov. 1 to Dec. 15, haven’t been released yet. The weekly numbers from the Centers for Medicare & Medicaid Services only show how many people selected plans, not how many of them actually started paying the monthly premiums, meaning they can skew a bit on the high side.

Still, the number of people filling out an application for the plans in South Carolina clearly outstripped prior years.

Frank Knapp, CEO of the S.C. Small Business Chamber of Commerce who has advocated to expand the ACA, said he isn’t surprised by the jump in demand for medical coverage.

“We anticipated with all the layoffs that people were going to be turning to the Affordable Care Act,” he said.

In South Carolina, about 78,000 displaced workers were receiving unemployment aid as of Dec. 26, according to the S.C. Department of Employment and Workforce. More in the state have likely applied for those benefits.

The increase in South Carolina residents selecting a plan through HealthCare.gov comes at a time when they have more options. After the ACA’s first year, BlueCross BlueShield of South Carolina was at one point the only carrier offering plans on the marketplace. Now, with newcomers to the market, most South Carolina enrollees had their choice of three companies. The exception was Oconee County, where residents have one option.

That trend holds true across the country. The number of counties nationwide limited to a single ACA coverage choice is down to 10 percent, compared to about 56 percent four years ago, according to the federal government. 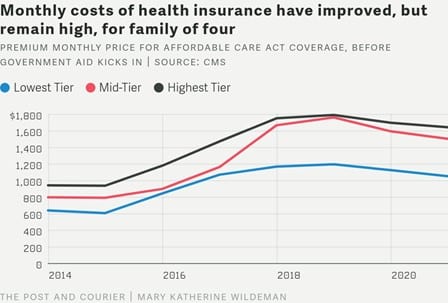 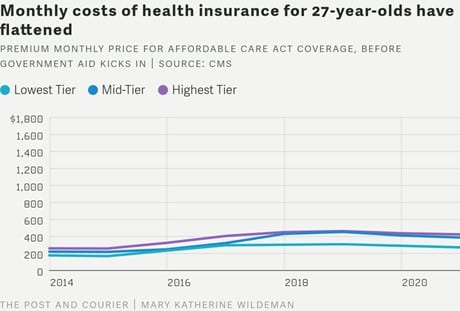 That bodes well for the health of the ACA marketplace, and the cost of premiums have also fallen. Almost everyone who buys marketplace coverage qualifies for a government subsidy that knocks down the price considerably.

Ray Farmer, director of the S.C. Department of Insurance, has said the market has matured over time, encouraging more competition. Farmer said it is too early to draw conclusions about why HealthCare.gov recorded more plan selections this year.

The increase in sign-ups in South Carolina is an exception compared to the country as a whole. Nationwide, plan selections were down slightly year over year.