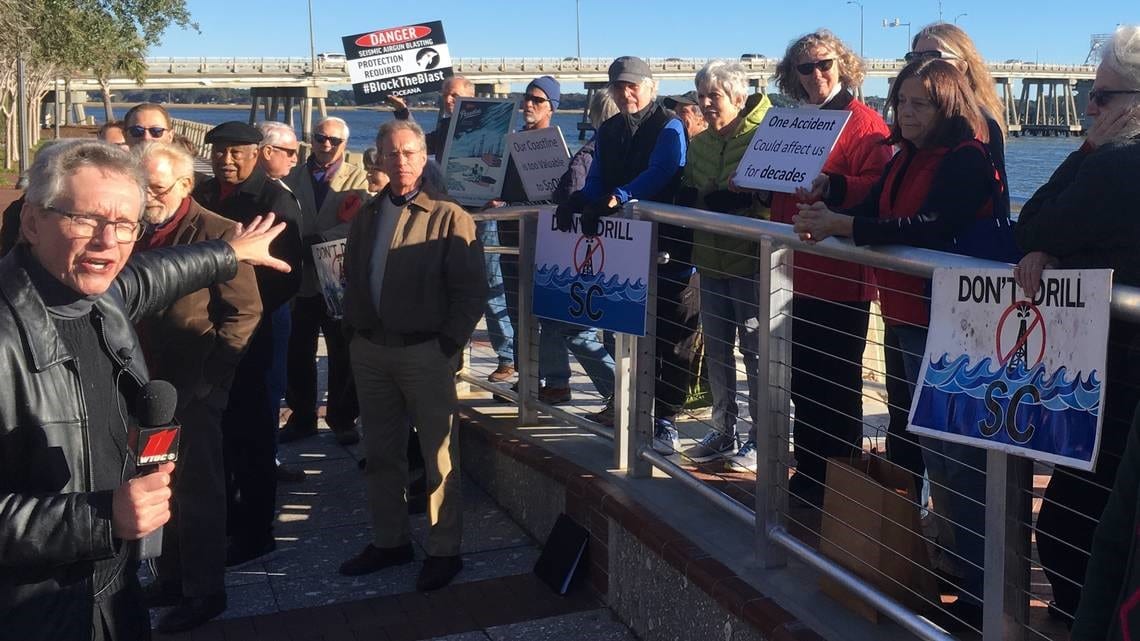 Frank Knapp, left, gestures to a group gathered before a news conference in Henry C. Chambers Waterfront Park on Tuesday. Knapp, CEO of the S.C. Small Business Chamber of Commerce, was joined by Beaufort County officials to talk about a federal lawsuit filed by S.C. cities seeking to block permits allowing seismic testing for oil and gas in the Atlantic Ocean. Stephen Fastenau

With a backdrop of the Beaufort River — steps from downtown shops and seafood restaurants frequented by tourists, and within sight of charter fishing vessels — Beaufort County leaders on Tuesday asked a group gathered to imagine oil smudges on the shiny aluminum dock behind them.

Beaufort County communities have joined more than a dozen other coastal cities and towns in suing federal regulators in an effort to block oil and gas exploration off the South Carolina coast. It’s a move they say is an important step to protect a large part of the area’s economy.

Beaufort Mayor Billy Keyserling, in a statement before a news conference Tuesday in Henry C. Chambers Waterfront Park, called the permits “a green light to enter our waters and begin destroying what we have.”

He asked a group gathered in front of a new city dock to think about what an oil spill would mean for Hunting Island State Park or what an oil slick would do if carried in on a king tide buoyed by rising sea levels.

“We will do anything and everything to stop this,” Keyserling said.

That could mean changing zoning rules if necessary to block on-shore activity associated with oil drilling, he said.

Legal action had long been expected.

Beaufort and Port Royal officials quickly agreed to join a potential lawsuit after the Trump administration announced plans early this year for a new five-year oil and gas leasing program opening large areas of the Atlantic to exploration and drilling. Bluffton and Hilton Head soon followed.

“Hilton Head loves its turtles, loves its shorebirds, wants to have clean beaches,” Hilton Head Town Councilman David Ames said. “… This is the way we think we have to do it.”

Local leaders have fought the prospect of offshore drilling for years, holding that the risks to local economies largely dependent on fishing and tourism were not worth any anticipated economic benefit.

An oil industry report released in November said tapping oil and gas reserves could be worth $1.5 billion in tax revenue for South Carolina over the next 20 years.

Thousands of animals, including dolphins and the endangered right whale, would be harmed by the seismic tests under special authorizations issued to seismic testing companies in November, said S.C. Environmental Law Project director Amy Armstrong, whose group filed the suit.

The testing involves sending loud airgun blasts to the ocean floor at regular intervals to search for oil and gas deposits.

The authorizations allow testing companies to harass or injure marine mammals as an expected but unintentional consequence of the blasts.

Such permits are allowed under federal law if the testing will affect a small number of animals and have no more than a “negligible impact” on a species.