You’re invited to join us Tuesday, July 27th, for a business leader briefing with Deputy Secretary of Commerce, Don Graves, on Infrastructure and the American Jobs Plan.

The Deputy Secretary will provide:

Please join us Tuesday, July 27th at 3:00 p.m. ET for this important conversation.

We welcome you to share this event with other business leaders & organizations in your network.

WHAT:
Briefing on Infrastructure and the American Jobs Plan 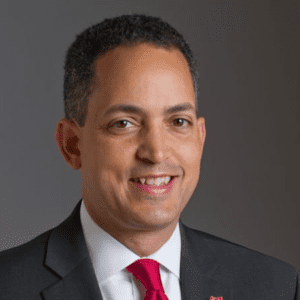 Don Graves is the 19th Deputy Secretary of Commerce.

Graves brings decades of experience in the private sector, government, and nonprofits to the Department of Commerce. Most recently, he served as Counselor to President Joe Biden during the 2020 presidential campaign. Prior to that, Graves served as Executive Vice President and Head of Corporate Responsibility and Community Relations at KeyBank. In this role, Graves led KeyBank’s corporate responsibility team, including the bank’s $16.5 billion National Community Benefits Plan, the bank’s sustainability work, stakeholder engagement, and outreach, and oversaw the KeyBank Foundation and the First Niagara Foundation.

During the Obama-Biden Administration, Graves served as Counselor and Domestic and Economic Policy Director for then-Vice President Biden. He was previously appointed by President Barack Obama as Executive Director of the President’s Council on Jobs and Competitiveness and led the federal government’s efforts in the economic recovery of the city of Detroit. Graves also served as Deputy Assistant Secretary for Small Business, Community Development, and Housing Policy at the U.S. Department of the Treasury, where he oversaw the CDFI Fund, the $4 billion Small Business Lending Fund, and the $1.5 billion State Small Business Credit Initiative. He was also the U.S. Federal Representative to the G7 Task Force on Social Impact Investment.

Graves has a rich family history connected to the Commerce Department. His four-times great grandparents built a successful horse and buggy taxi business in Washington that once stood at the site of the Department’s headquarters. Their son went on to own a premier hotel just blocks away and become one of our nation’s first Black patent-holders through the U.S. Patent and Trademark Office.

Graves holds a Bachelor of Arts in Political Science and History from Williams College and a Juris Doctor from the Georgetown University Law Center, where he received the Dean’s Award. He is a fellow of the National Association of Public Administration. Graves is married and has two children.