If Frank Knapp, Jr. has his way, the Biden administration will budget more money for small businesses and give out more loans to entrepreneurs in underserved communities.

“The SBA (Small Business Administration) is broken,” Knapp said when he visited the area as part of his nine-city, one-man tour, bringing his message to the attention of the public and media.

“We’re at a 40-year low in new business startups,” he said. “Economists tell us that all net-new jobs in the nation are created by businesses less than five years old and that they have four or fewer 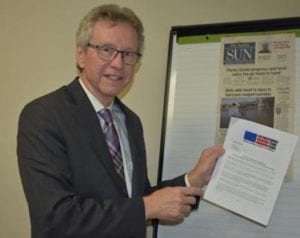 Meanwhile, he cited the SBA Office of Advocacy which found the number of commercial banks declined from 14,400 to 4,600 since 1980, representing a 68% drop due to consolidations and failures.

Calling himself a “problem-solver and advocate,” Knapp cited his background in running a business. He is the president and CEO of the South Carolina Business Chamber of Commerce; has owned and operated a public relations and advertising business; worked in sales, and he was a lobbyist and executive director of a nonprofit.

What Knapp wants is for others to band together with him in calling on the Biden administration to give the President’s new head of the SBA — Isabella Guzman — more power in disbursing loans and controlling where the loans go.

Under the present system, SBA-backed loans will give the lender 85% of the loan back, should the borrower default. But many banks are unwilling to give out what they consider high-risk loans in the first place, Knapp said.

He would like to see Guzman be appointed “the small business czar,” allowing the agency to make it easier for small businesses to obtain loans.

He said his campaign’s supporters will lobby Congress to do the following:

Knapp said the SBA’s existing authority under the Small Business Act should be used to “rebuild the nation’s small business economy.” He said the SBA should be simplified and Isabella Guzman should be “given the mission to coordinate a whole-of-government approach to remove the barriers to entrepreneurship.”

How did the pandemic affect small businesses here?

John Wright, president of the Punta Gorda Chamber of Commerce, told how the pandemic affected our local small businesses.

“When the pandemic first hit, the immediate effect impacted all businesses, with a large percentage closing their doors temporarily until they figured out what was going to be the real effect on their businesses.”

Wright said the Payroll Protection Program (PPP) loan process was initially confusing, its application process “arduous.” He said, however, it “was a very important lifeline in the business survival period.

“We, like any other business, were affected by a sudden cessation of cash flow.”

Wright added that PPP loans in the first round were not available to nonprofits, such as the Punta Gorda Chamber, but “it was obvious that the receipt of PPP funds allowed most businesses time to adjust their business model to reflect the new protocols being imposed on them.”

Wright said that by the time the second round of PPP loans were announced, “We decided not to apply, given the questions about repayment and repayment dates that still lingered from the first round.

“Now many months later, I believe nearly all those businesses that received PPP support remain grateful that the funds were made available to them.”

Wright noted a crisis like the pandemic “had never hit the commercial sector as hard in living memory.” He said the availability of funds was “critical and timely.”

Wright said, “We should all now be better prepared for such eventualities in the future.”

Although many sectors are doing better now than in pre-pandemic times, “there still remains a volatility surrounding certain sectors like retail and hospitality,” he added.

As the area started to reopen, “We saw a positive upswing in visitors to the area that made for a better-than-normal summer season. We await how travel will affect summer 2021 to see whether we can maintain our off-season growth.”

What more can be done?

Knapp said he agreed with Wright’s words, pointing out that only 16% of Florida’s small businesses got a PPP loan last summer.

He said the SBA should be able to do so much more to help small businesses.

In 2020 the nation’s 175 SBA-approved small business micro lenders made 5,890 loans averaging $14,434; only 33.4 loans per lender were given to small businesses, according to SBA data culled by Knapp.

The proposed legislation would authorize funds for the SBA administrator to approve additional state-regulated lenders to participate in the SBA’s 7(a) loan program on the condition that at least 50% of lending is directed to small businesses in low to moderate communities.

Knapp said he didn’t think the bill “would do much; it’s still up to the private lender to decide whether they want to make a more risky loan.”

“You can’t get a bank to make a loan if they don’t want to,” he said. In short, the banks give out loans to their best customers, he emphasized.

“Politicians are fond of saying that small business is the backbone of our economy,” Knapp said. “Well, that backbone is deteriorating.”