Starting a small business pre-pandemic was hard, and now it’s even harder.

That’s why Columbia, South Carolina-based Reform the Small Business Administration is advocating for reform in Washington to address what it says is a 40-year low in new business startups. The organization started its nine-city tour Monday in Jacksonville. 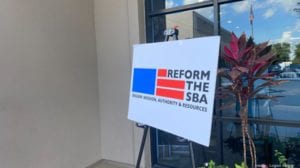 Frank Knapp, coordinator of Reform the SBA, and also president and CEO of the South Carolina Chamber of Commerce, said it’s essential for the SBA to come up with different ways of distributing capital to businesses that need it or those just starting.

He said many small startups only require $10,000 to $15,000 in capital to hit the ground running, but that depends on how many employees there will be.

“We know that entrepreneurs’ belief that they can actually secure a loan has dropped 50% from March 2020 to only 37% this past March,” Knapp said. “There are about 175 (financial institutions) that are part of the Community Development Financial Institutions Fund (CDFI).”

CDFI certification is a designation given by the U.S. Treasury Department’s CDFI Fund to organizations that provide financial services in low-income communities and to people who lack access to financing. These lenders made up approximately 10% of all Paycheck Protection Program participating lenders in 2020.

There is one institution on the First Coast that is CDFI certified.

“The SBA ought to be making these small business loans and paying a CDFI or some other organization to administer the loan,” he said.

Knapp said this is what will make a difference in rural and underserved communities.

“The bank and the SBA need to be more lenient, and more risk taking,” said Kelly Harris, owner of Village Bread Cafe at 4073 Phillips Highway. “They cannot do that if the current state of banking has too much regulation.”

Harris said the PPP has kept not only his business alive during hard times, but it’s done the same for other restaurants in the area, too.

The campaign is supported by a number of business organizations, several of which are national, including the United States Independent Business Association, the American Sustainable Business Council and the US Green Chamber of Commerce.