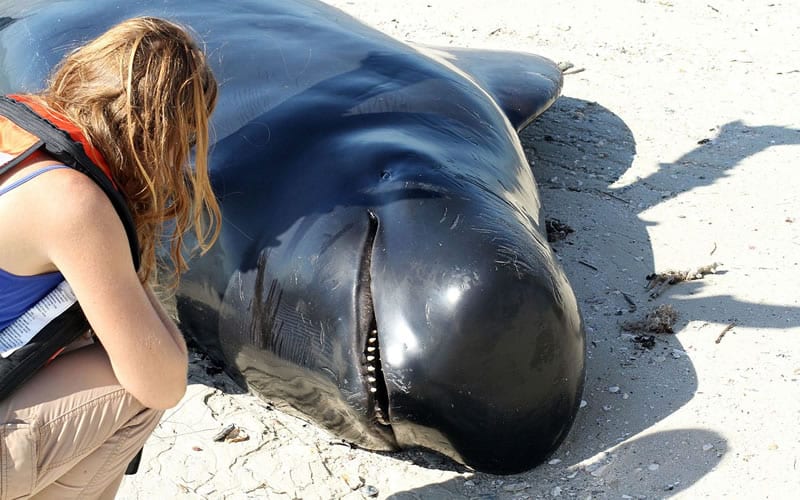 A National Park Service volunteer examines a beached pilot whale in the Florida Everglades. While the cause of the whale’s death in 2013 was unclear, the photo resembles strandings in New Zealand at the end of 2016. Photo via Wikipedia.

By Frank Knapp Jr., special to Statehouse Report  |  Here is a political axiom:  If you say an untruth often enough, loud enough and that untruth is never rebutted with the same intensity, the public and government officials eventually believe it.

This is the political axiom that the proponents of seismic testing for offshore oil rely upon when trying to counter the overwhelming Atlantic Coast public opposition to this destructive exploration process.

Last Friday, the Obama Administration’s Bureau of Ocean Energy Management denied all seismic testing permits for oil exploration off the Atlantic Coast.  Local coastal businesses, governments, environmental organizations and citizen groups were overjoyed.  They had been working for years against this exploration, which destroys marine life through sonic airgun blasting and threatens the tourism, commercial fishing and recreation economies of our Atlantic Coast.

However the seismic testing companies, which stand to make hundreds of millions from the exploration, immediately rolled out the same boiler-plate, untrue objection to the factual criticism of their industry.  The media covering the story simply reported the seismic testing industry propaganda as if it were fact.

The president of the National Ocean Industries Association told the Associated Press that “seismic and other geophysical surveys have been safely conducted offshore . . . for more than 50 years.” And according to the International Association of Geophysical Contractors: “(T)here is still no scientific support for statements that sound from seismic surveys harms marine life populations.”

Here is the truth to those untruths:  Biological impacts of seismic airgun blasting have been well-documented.

Yet, seismic testing advocates know that all these negative impacts are out of sight and thus out of mind for the American public. Therefore, they just keep saying that seismic testing is safe for marine life.

What the public needs is to see the truth for themselves.

There is a real-life experiment currently underway in New Zealand that clearly and publicly shows the correlation between seismic airgun blasting and dead or impaired marine life.

Since Nov. 13, 2016, the largest seismic testing ship in the world has been exploring for oil off the east coast of that country.

The results are there for the world to witness.

Whales that typically live in very deep water soon were being spotted close to shore and beach strandings began by the end of December setting off alarm bells.

Fortunately for New Zealand, the dead whales were in remote areas and won’t impact the country’s economy. But just picture these great animals on the beaches of the Atlantic Coast.

And it’s not just whales. Dolphins, sea turtles, deep sea game fish and commercial fish are all harmed by the sonic blasting that goes off every 10 to 12 seconds as the vessels troll back and forth mapping an area for up to a year.

The seismic testing industry will be back asking the Trump Administration for permits to look for offshore oil in the Atlantic and claiming the process is safe.

But the truth about seismic testing is as clear as a photo.  The public, media and our elected leaders need to see and hear the truth often and loudly.

Knapp is the President/CEO of the South Carolina Small Business Chamber of Commerce and co-founder of the Business Alliance for Protecting the Atlantic Coast.

Opinion: Costs are up on everything except one thing everyone needs - scsbc.org/opinion-co…