Americans are often accused of having very short memories.  Lessons from even recent history aren’t always learned.  So often we’re convinced by public officials and big business that we should just keep trying bad public policy that has failed us before.  Unfortunately because these pied pipers have such big, well-financed mouthpieces and wrap their message in “common sense” language, the public largely buys into it.

So it is quite refreshing to see the public’s resistance to all the criticism of regulations that have been put in place following the recent Great Recession in order to prevent another collapse of our financial markets.

The legislative vehicle to protect all of us from the greed of Wall Street was the Dodd-Frank financial reform of 2010.  On April 12th of that year I was honored to speak at a press conference held by U.S. Senators Dick Durbin, Jack Reed and Michael Bennet.  We were at the Capitol to support the Wall Street reform legislation that was signed into law in July of that year. 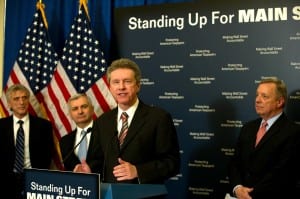 Since then the big banks and Wall Street have publicly complained wildly about new regulations and spent millions to lobby Congress and the newly created Consumer Financial Protection Bureau in hopes of stopping the latter from enforcing regulations.  The message has been that the nation’s economy would soar if we just unshackled Wall Street and big banks and let them do all the same risky transactions that tanked our economy about 6 years ago.

But while many in Congress have swallowed this line with the help of generous campaign contributions to make it go down easier, the public apparently still has a bad taste in its mouth and isn’t drinking the cool aid.

A new poll finds that the public wants even stronger rules to rein in Wall Street and big banks (78% in favor to 11% opposed).  And the support for tougher rules crosses party lines with 72% Republicans, 78% independents and 85% Democrats in favor.

The poll, commissioned by the Americans for Financial Reform and the Center for Responsible Lending, can only be explained in this way.  The American public, in spite of all the muscle of Wall Street, still does not trust the behemoths of the financial sector to do the right things to protect the public from another Great Recession.